Office of the University Registrar


Description of the Academic Costume

The Sablay is the official academic costume of the University, replacing upon its introduction in 1990 and its official adoption in 2000, the traditional mortarboard (cap) and toga.

The Sablay symbolizes our nationalism and the importance we put upon our indigenous culture, which are among the values learned from the University. The word "Sablay" refers to an indigenous loose garment that, simple yet elegant, is used traditionally used for formal occasions. As a verb (isablay), it also means to put a precious object like a piece of cloth or garment upon one's shoulder, as a way of giving value and respect to this selfsame object.

The Sablay, as the academic costume is adorned with ukkil and geometric elements. The ukkil represents the growth of knowledge while the triangles and chevrons, as geometric patterns, are common design elements across indigenous cultures in the Philippines.

The University's acronym, UP appears as a symbol on the Sablay. This symbol is based on the baybayin for U and P, but it has been designed to represent the University's indigenous acronym itself, and is not meant to be read in a syllabic way as the corresponding baybayin characters are.


When the Sablay should be worn

Due respect should be given to the Sablay, it being the official academic costume of the University. Therefore, it should be used only during academic functions and activities such as:


What to Wear With the Sablay

Formal clothing should be worn with the Sablay as a sign of respect for the official academic costume and to preserve the solemnity and dignity of the occasions when it is worn.

The following dress code is suggested:

Dress color: Ecru/Beige/Cream
Dress style: Preferably with sleeves or if sleeveless, worn with shawl or bolero
Dress length: Any length below the knee up to the ankle
Shoe style: Formal shoes
Accessories: Jewelry should be at a minimum preferably earrings and necklace only

Sablay Length should be mid-thigh for aesthetic and practical purposes, allowing for movement.

Paraphernalia such as College pins and hood may be worn with the Sablay during the College Recognition Rites but not during the General Commencement Exercises when only the UP pin is recommended.

The Sablay should not be worn by either male or female with a hat.


How Sablay should Be Properly Folded

The Sablay should be accorded with appropriate handling as befitting of an academic costume. It is recommended that it be folded and packaged in a manner that will show the baybayin and ukkil in front.

How to Shift the Sablay

This is how candidates for graduation should wear the Sablay during the Commencement Exercises, before conferment of their degrees. Note that the Sablay hangs from the right shoulder, with the band slightly below the shoulder. 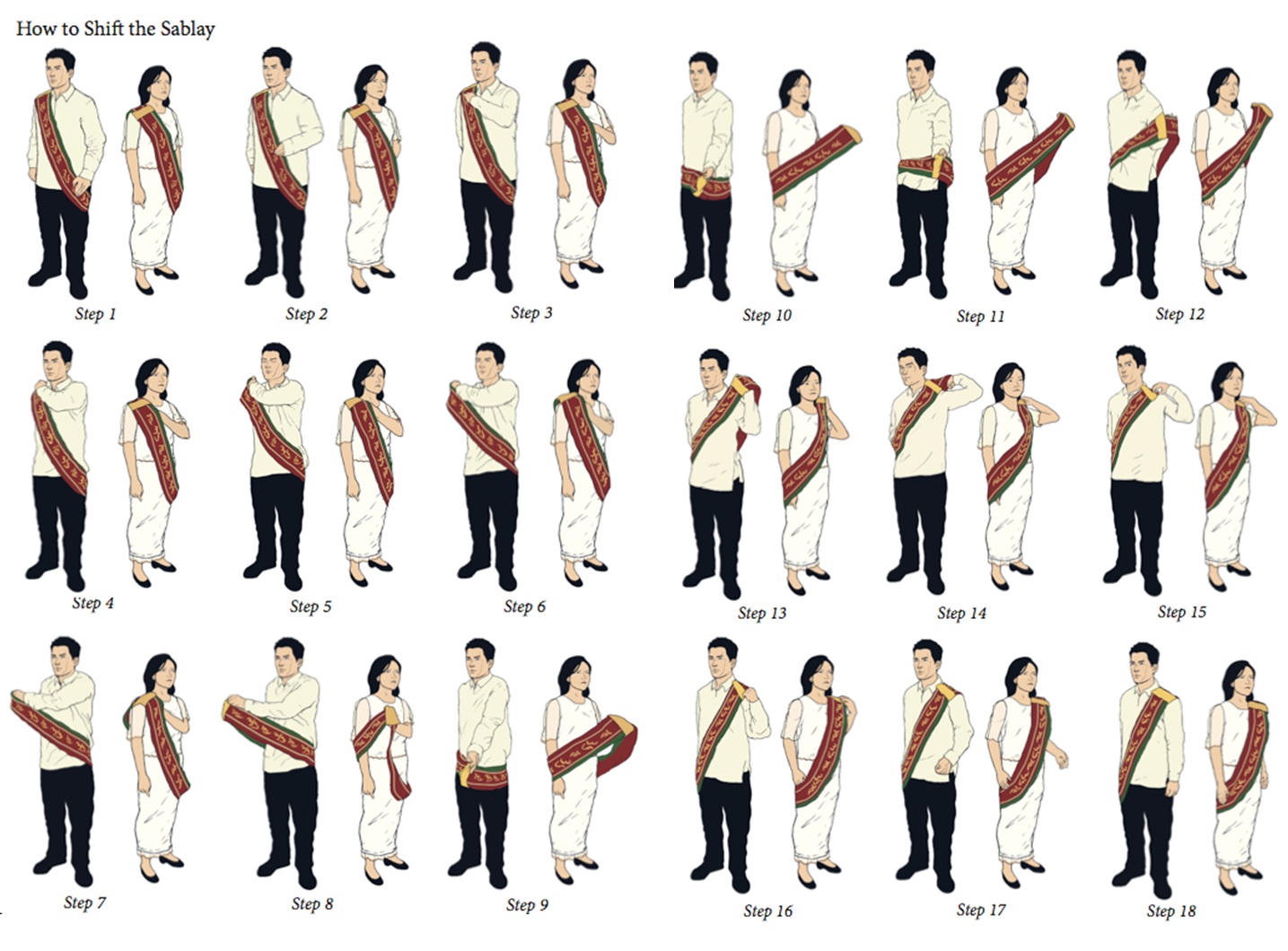